What Makes Teachers So Hot For Sugar Daddies 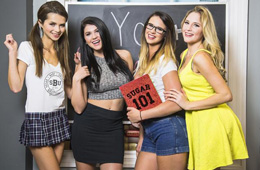 A survey conducted by leading sugar daddy dating site shows that educators are a favorite among sugar daddies from across the globe. The website that connects young women and wealthy men reports an exponential rise in the number of registrations from educators. In fact, it has been reported that hundreds of thousands of teachers have signed up with this site in search for extra income.

According to statistics issued by a popular sugar daddy dating website, the annual salary of an average public school teacher is $56,100 while that of an average sugar daddy registered with the site is $524,127. As a matter of fact, the average teacher on this site asks not more than $3,000 as monthly financial assistance.

According to statistics issued by the U.S. Department of Education, in 2014 about 3/4th of all the teachers in public schools were female. It also states that 44 percent of those under the age of 40 and more than half of them had a master's or higher degree. Most of the teachers on this site have advanced degrees and are certainly not getting the kind of money they are looking for.

The survey also revealed that most sugar daddies who are attracted to teachers either belong to the finance sector or claim to be movie producers. Most of these individuals claimed to have an annual income of over a million and resided in cities like New York or Los Angeles. On the other hand, these men offered $3,000 to $10,000 as monthly compensation in addition to five star dinners, Broadway shows and vacations, among others.

While all sugar daddies do not ask for sex, the possibility of this cannot be ruled out. Indeed, you might find quite a lot of sugar daddies that would have sex at the top of their priority list. It is been observed that most of these people are either committed or married. The reason they are looking for a relationship based on mutual benefits is that they don't have time for a full - time relationship due to the nature of their work.

It goes without saying that today's teachers are under enormous pressure. They have a daunting task of molding the mind of the next generation but are expected to do so with lesser wages and significantly higher working hours compared to their peers. In fact, a report published in the New York Times had also reported that public school teachers have to work outside their classroom in order to lead a decent life. Some people have also gone on to say that teachers are paid so low that they get into the sex trade to make ends meet.